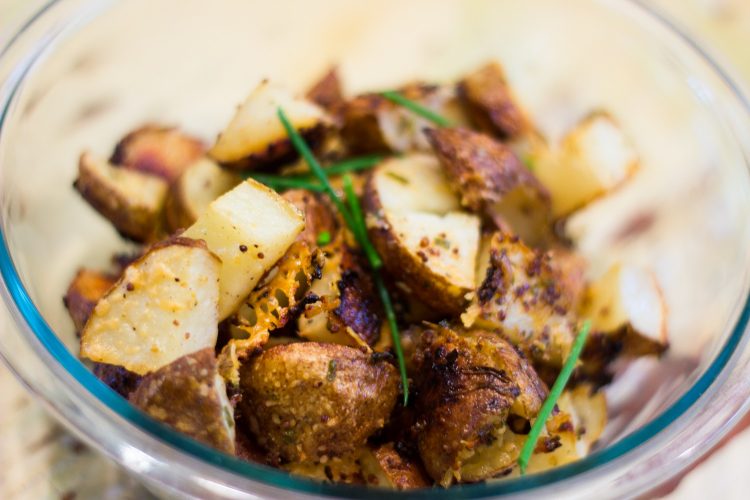 I like to watch cooking shows while I’m doing other things. I put them on in the kitchen while I’m cleaning up or cooking, and sometimes I have them on while I’m working. The result is, I miss a lot. Sometimes I notice that I missed the one thing I wanted to see and I rewind and play that part again. And, very often I still miss it and have to repeat the process several times before I finally catch it. This recipe was inspired by one of those episodes.
I was watching Giada at Home. The episode was My Grandfather’s Favorites. So, Giada and her Aunt Raffy are recreating some of Dino De Laurentis’ favorite recipes. Giada has revamped the recipes in her own style, and it irritates Raffy to no end. They bicker. Giada grins at the camera a lot. And it feels a little weird that she’s the one in charge, instead of her aunt, given the theme of the episode. But hey! It’s her show. I think it would be interesting to see them make both versions, side by side. And, much more interesting to actually taste test both versions! 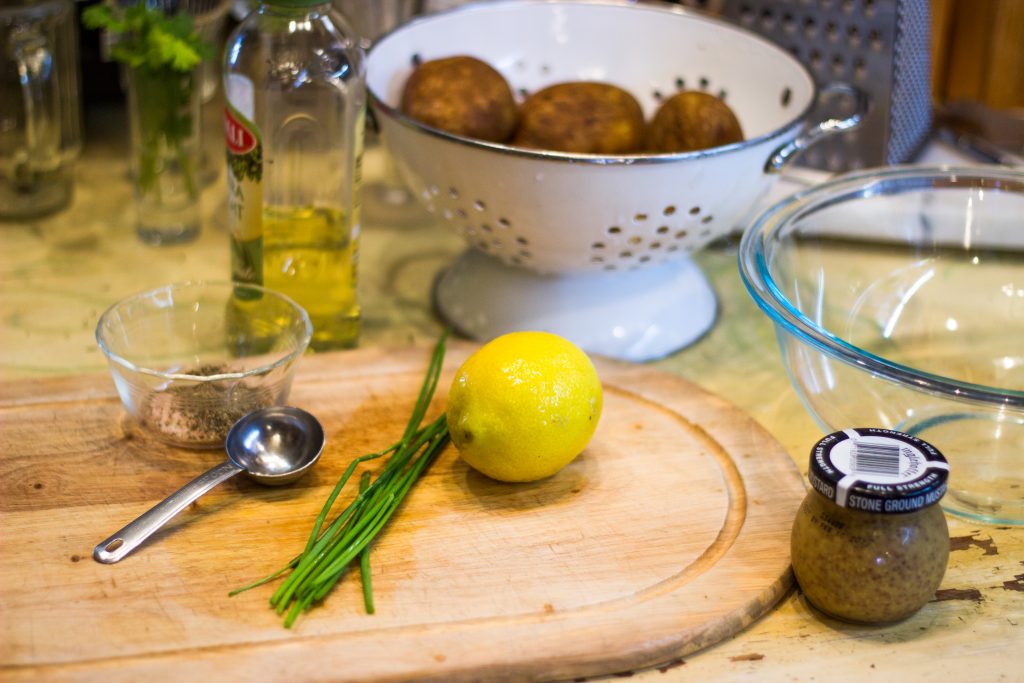 My lemon mustard roasted potatoes are inspired by her lemon-mustard potato salad. Hers sound really yummy, but I was after roasted potatoes that could be reheated, rather than a salad dish with greens and other fresh stuff. Plus, it was important that I could use ingredients that I had on-hand. That is often a major factor in my adaptations and I hope that you will follow suit and take my recipes as an inspiration and a guideline to be adapted to the ingredients that you have, can easily get or just prefer!
Lemon Mustard Roasted Potatoes – Ingredients 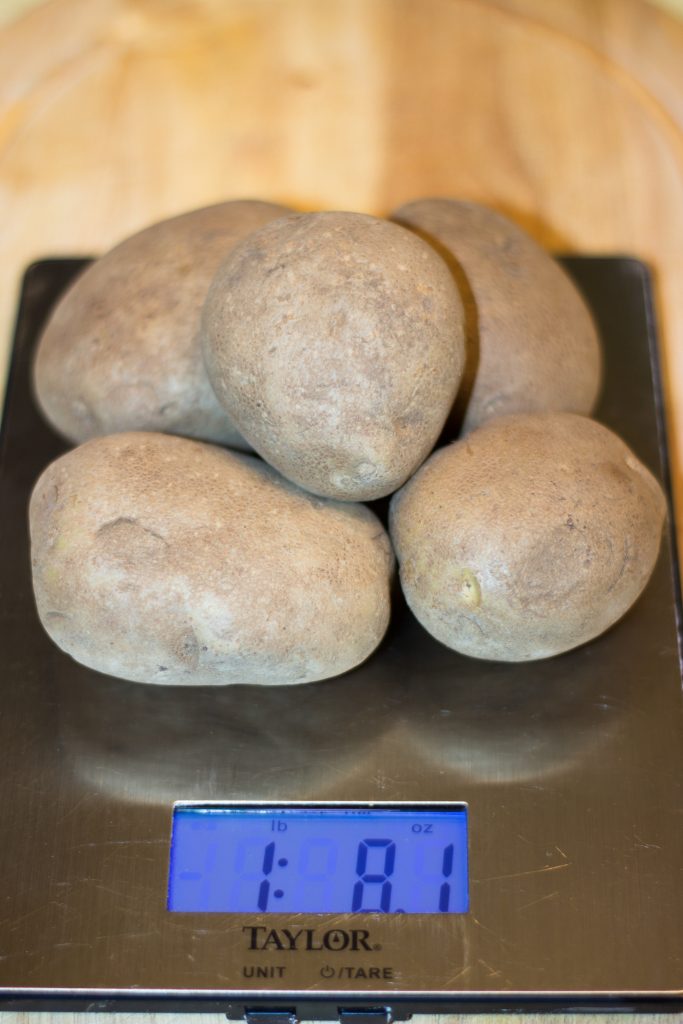 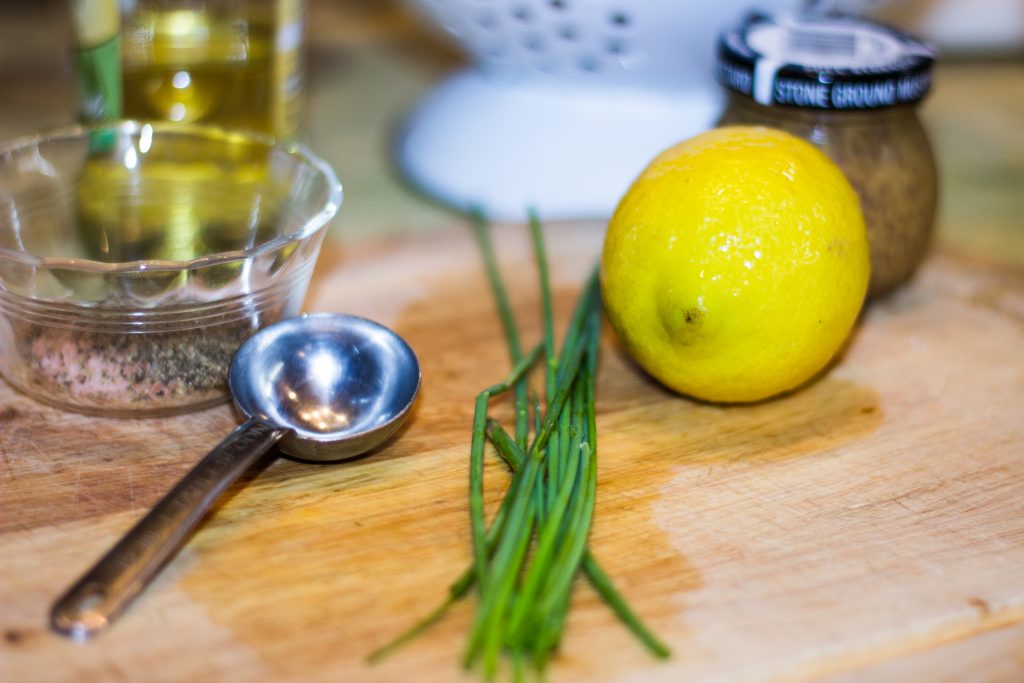 Instructions:
Preheat oven to 375
Chop chives or cut with kitchen scissors
In a bowl large enough for tossing the potatoes, whisk together all ingredients except the parmesan and potatoes
Scrub potatoes and cut into large bite-sized chunks
Dump the potatoes into the bowl with the dressing and toss until thoroughly coated 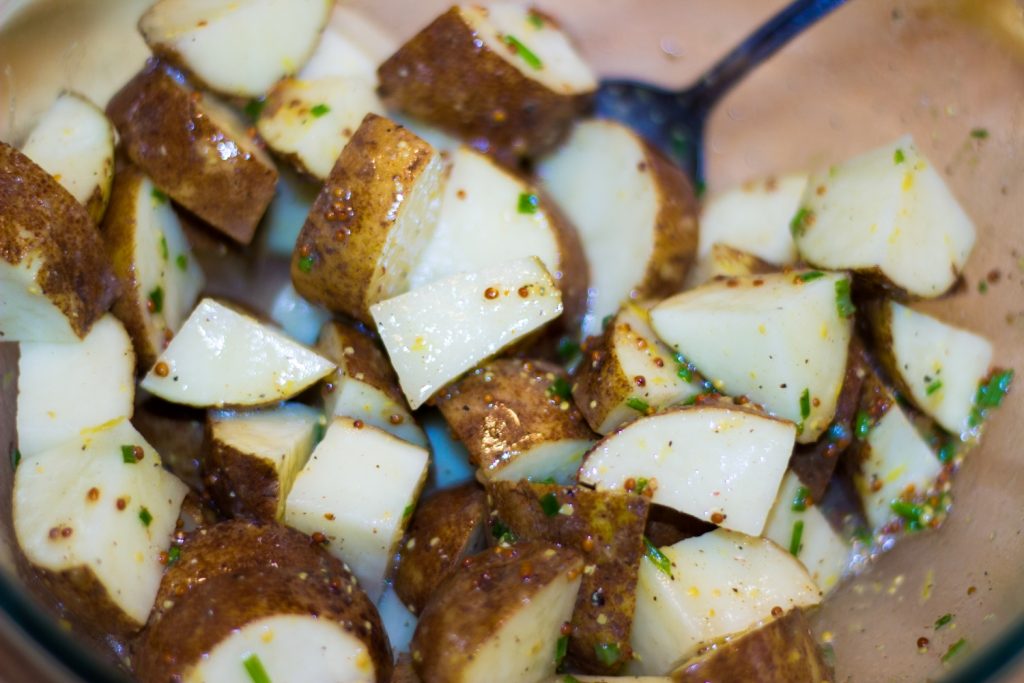 Cover a baking sheet with parchment paper (you don’t have to, but it will make your life much easier)
Spread the potatoes in a single layer on the baking sheet
Spoon any dressing remaining in the bowl over the potatoes
Bake for 20 minutes
Top with shredded Parmesan
Baked for another 20 to 30 minutes, until golden and tender
Transfer back into the bowl and toss with remaining chive fragments 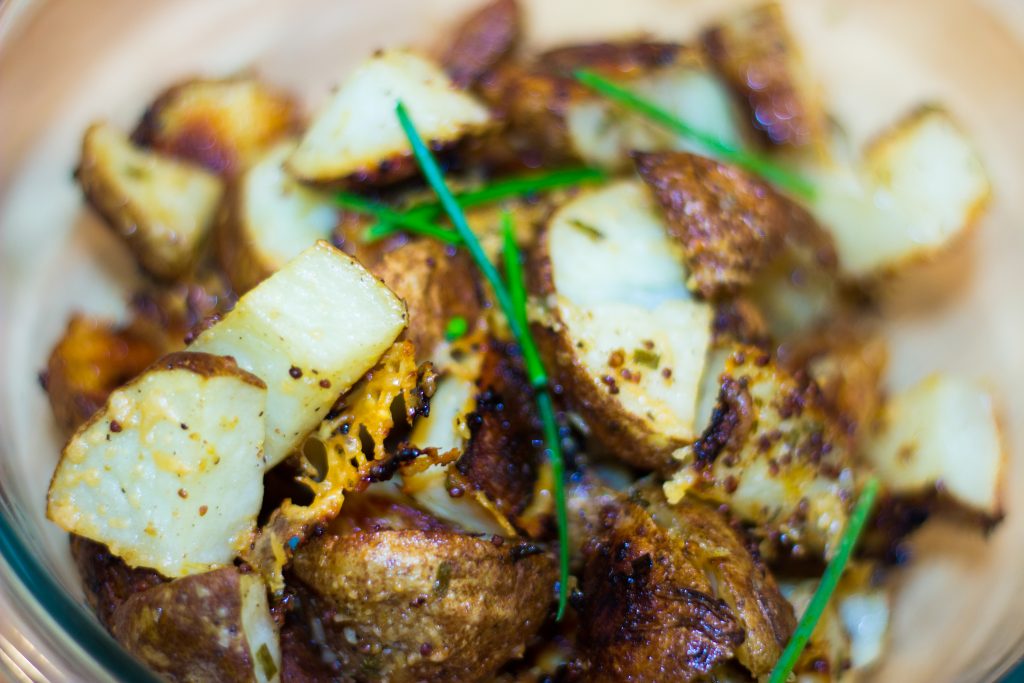 I served this with baked chicken breast and Ranch on the side. Some kind of vegetable, like steamed Brussels sprouts, broccoli florets or artichoke hearts would go great with the meal, since they are all easy to make and great for dipping.
What will you serve your lemon mustard roasted potatoes with?